For more information, please refer to Language Support for the Neural Machine Translation model on Google.

Other language pairs such as Korean to Chinese are supported by base model, Phrase-Based Machine Translation. The old model is just base quality but covers all possible language pair combinations.

Base or Neural MT

When you translate your documents using machine translation at WiseTranslate.net, you'll be able to tell which model is applied as shown below. 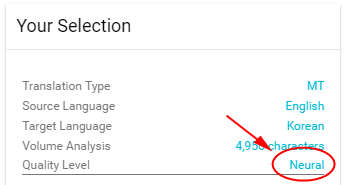